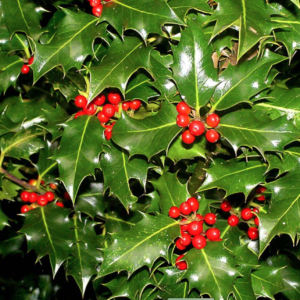 The evergreen holly is a native species which you will find in a lot of Irish native forests and woods. Holly dates back to the druid era and it’s name as gaeilge is ‘Cuileann’.

It’s evergreen leaves represent immortality; the spines recall Christ’s crown of thorns and the red berries drops of his blood. Holly is always used as a decoration in Irish houses.

Some people used bless the holly with holy water before putting it up.

Planting and Care of Holly

Holly likes a very well drained soil and a relatively sunny position. It is very hardy and can put up with pretty cold conditions. Holly likes good nutrition in the soil, so use slow release fertilizer when planting and every 6 months from there on.

Most people get very confused with varieties of holly – it is very hard to tell the sex of a holly from the leaf, you would have to wait until it flowers! Generally, if you have a male and female holly in the same garden, you will get a good crop of berries.

This entry was posted on March 5, 2021, 5:20 pm and is filed under Plant of the Month. You can follow any responses to this entry through RSS 2.0. Responses are currently closed, but you can trackback from your own site.